The 80’s weren’t just characterized by the emerging of the New Wave of British Heavy Metal (featuring bands like Iron Maiden, Saxon, Def Leppard and Tygers of Pan Tang). Also Thrash Metal made its appareance in 1983 with Metallica’s (still) phenomenal album ‘Kill ‘m All’. This music genre was rooted by previously mentioned NWOBM combined with the rawness and speed of punk. 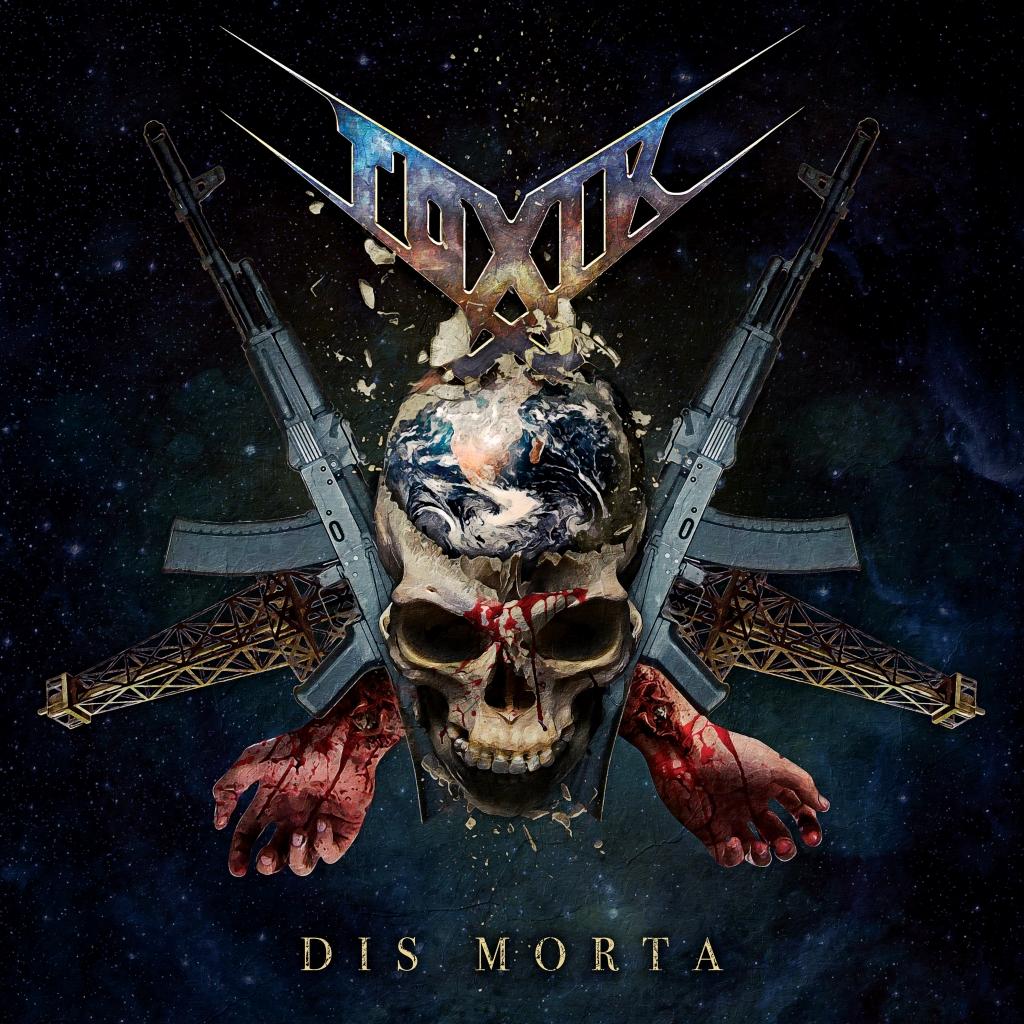 Several bands followed and between 1983 and 1986 we were spoiled with 3 topalbums of Metallica and Slayer, as well as 2 great albums of Megadeth and Anthrax (and ofcourse the memorable debut album ‘Bonded by Blood’ by Exodus in 1985). The emergence of the Big 4 (Metallica, Slayer, Megadeth and Anthax) was thus a fact. (They toured by that name in 2010, with a dvd/cd box ‘The Big 4 – Live from Sofia, Bulgaria 2010’ as a nice tangible memory.)

The time period 1987-1989 came with a second enrolment of Thrash metal bands that characterized by focusing on melodic and technical songs: Testament, Death Angel, Sacred Reich, Forbidden and Toxik. All of these bands made an entrance with a whirling show at the legendary Dynamo Metal Air (Eindhoven, The Netherlands).

New York’s Toxik stood out because of their progressive songs, the amazing guitar play of Josh Christian and the crystal clear high-pitched voice of Mike Sanders. The album ‘World Circus’ (1987) hit like a bomb. The band was rewarded with performing at Dynamo Open Air in 1988, still one of the best concerts ever. Their second album was released in 1989, ‘Think This’ (with Charles Sabin as the new lead vocalist) on which the band further developed and added a new flavour to the genre with their unique progressive sound. The rise of Grunge (Nirvana, Pearl Jam, Soundgarden) caused record labels to lose interest in thrash metal. A lot of bands quit, and so did Toxik.

Luckily a lot of there bands revived in the new Millennium. Toxik carefully did so in 2007, but fully returned in 2013. They released an EP ‘In Humanity’ (vocals by Mike Sanders), followed by an EP ‘Breaking Glass’ (2017) with Charles Sabin as lead vocalist. These EP’s weren’t easily obtainable (mostly at the band’s gigs), so No Dust Records releasing both of them, combined with tre-recorded songs ‘Kinetic Closure’ and 2 additional new tracks in an amazing boxset (2018) was a great move. I remember getting the box before Josh even did so and I shared audio samples via Messenger with him, because he was so curious of the sound of it (Heavy as Hell it was!). On ‘Kinetic Closure’ Ron Iglesias was introduced, who has been the lead singer eversince.

Finally the third full-length album ‘Dis Morta’ (no less than 33 years after their last album ‘Think This’) will be released soon. They understood the importance of this album and have therefore (“assisted” by the COVID-pandemic) taken their time for it. Firstly noticed is the crystal clear sound, fitting perfectly with the more speedy and progressive tracks. Argentinian Martin Furia (also known as guitar player at Bark and Destruction) is responsible for mixing. Opening track ‘Dis Morta’ has an accruing intro followed by Ron’s howl leading to a speed up. What a great start! This chorus will linger for a long time. The track could have lasted longer, in my opinion, to contain even more.

The following track ‘Feeding Frenzy’ sounds familiar and would have suited on ‘World Circus’. Josh Christian shows a lot of speed and technique on this one again. On ‘The Radical’ and ‘Power’ (which may very well turn into a live hit) James DeMaria on drums noticeably fills the holes professionally. He joined the band in 2016 and also plays drums at Heathen, since 2020.

‘Hyper Reality’ features a lot of pace switches and has a somewhat jazzy-fusion sound. Typically a track that needs a few times listening to. ‘Creating the Abyss’ is released on YouTube, the second song after ‘Power’. Special attention for the following track: ‘Straight Razor’ is an instant classic! The track has equal qualities to ‘Heart Attack’ (World Circus): ultrafast riffs and a chorus that’ll stick with you for a couple of days. You can take a breather at ‘Chasing Mercury’: a midtempo track with a beautiful high-pitched vocal by Ron. Also Shane Boulos’s enjoyable bass loops are nicely reflected in this track.

The start of ‘Devil in the Mirror’ could be mistaken for a Savatage track, but after about a minute the riff will blow your speaker and the pace picks up. This is my personal favourite, as well as ‘Straight Razor’. The album gracefully ends with the speedy track ‘Judas’ and after a little over 44 minutes you’re going to need some time to recover from this rollercoaster.

You will discover something new every time you listen to it. ‘Dis Morta’ is therefore the perfect successor of ‘Think This’ and Toxik should be proud of this result. This album will get top-positions on a lot of annual lists, and rightfully so. Buy now or regret later! The album will be released on August 5th at Massacre Records and will be available digitally, in digipack and on (coloured) vinyl.

This review has been translated by IDS

You can read the Dutch review here